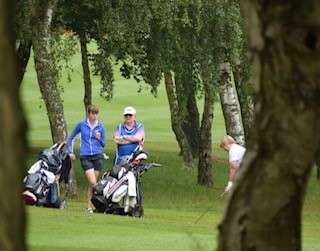 The last day of a long, hard and no doubt rather disheartening week for the Suffolk team probably couldn’t end soon enough.  The team managed a half with Cambs & Hunts, but unfortunately lost the other four matches.  Norfolk won the place in the English County Championship Finals, winning four matches out of five and will travel to Delamere Forest in September and we send our congratulations to them.   They had a really great week and thoroughly deserve their success.

Suffolk lost to Bedfordshire by 5.5 matches to 3.5 a scoreline which, despite two or three good performances and some very close results, handed Suffolk the wooden spoon over all.  Abbie Symonds had another fine day on the golf course.   With Lottie Whyman, she captured the one foursomes match point for the team before lunch and then polished off Chanel Fontaine-Geary by 6/5 in the singles.   Georgia Parker will have gone home happy.   She put her first County singles point on the board this afternoon when she beat Luca Thompson by 4/3.  We hope it is the first of many and that she has enjoyed the new experience.  The other half point for Suffolk came from Vanessa Bell who shared the spoils in her match against Georgia Staroscik.

The girls from Suffolk, who are all good golfers, will probably know why, after several years at the top of the league, they found themselves struggling this week.  Perhaps it is just that the other counties in the East Region have built up their teams with the aid of one or two outstanding players which has given them their turn to hit the high spots.  Whatever the reason, we wish our girls well as the 2019 golfing season moves on.  There’s plenty of it left to provide incentive.