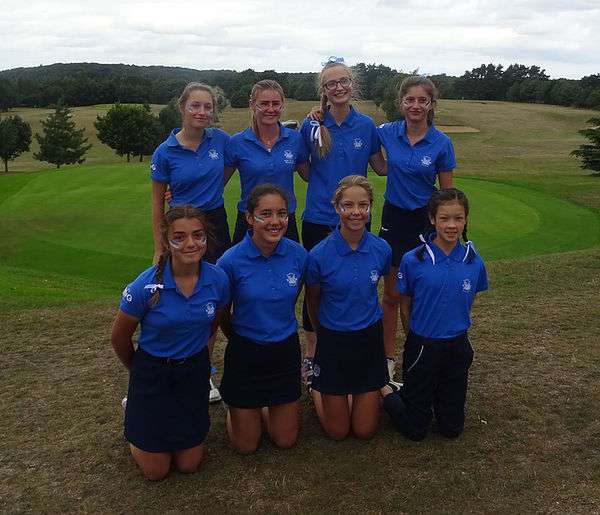 Maddie Rolph,  5-handicap golfer from Redbourn Hertfordshire, won the Championship with two great rounds of 72 and 75.   In a gusty wind, interspersed with showers and warm sunshine, Maddie finished one shot ahead of Millie Pratten (77/71) a fellow Hertfordshire player from the Essendon Country Club.

The golf was played in fine spirit and with great intent.   How good to see this bunch of young women swinging the club with a will which threatened to knock the cover off the ball and, in the main, with commendable accuracy and to long distance.  It was also noticeable that when a younger player was in difficulties, the more senior girls helped them out.   Nice manners all round!

Georgia Parker, Suffolk’s Junior Captain, was probably disappointed with her results but she has played some ‘big’ golf this year and is doing very well. All the Suffolk girls are comfortable on the golf course and Mary Cuthbert in particular looks as though she has been playing the game all her life.  Their general attitude makes good viewing and their Organiser, Alice Barlow, is patently doing a good job and enjoying it.   She is taking part in the English Women’s Stroke Play Championship at Ipswich this week and we will be following her progress with interest.

Newton Green was a welcoming place to play the Girls Championship and the seven-strong Suffolk contingent went at it with a will.   The most successful was Rio Everitt (The Suffolk) who featured in the prize-giving as the winner of the U15 Gross prize. She added an 81 to the 82 she returned in the morning.  Tala Clarke (Knebworth) came second in that category with 85/86.