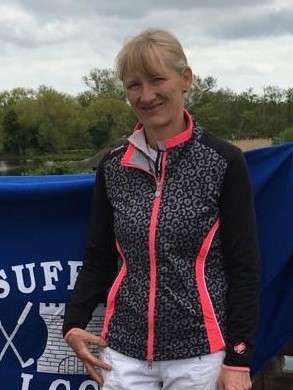 Playing par golf and generally putting like the proverbial demon, Fiona Edmond bagged the Seniors Championship for 2021, adding it to the Strokeplay event which took place on Tuesday and served as the qualifier for the Matchplay.   Her opponent, Pippa Neall ,was overwhelmed by a barrage which took Fiona to 8up after 11 holes and sealed the title for her.  She birdied the third and fourth, where she holed from around 30 feet, and the eleventh was a conceded birdie.  Her only mis-steps came on the second and the seventh where she three-putted, on eight, where she mishit her second and nine, where she tangled with the bunker on the left off the tee.   For the rest, she struck the ball impressively and, while the shorter putts caused slight difficulty, her long putting was literally immaculate. 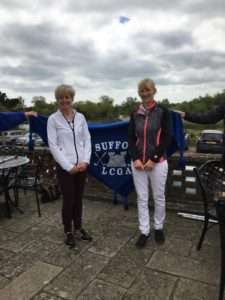 She certainly possesses an enviable array of technique across the game. She was able to conjure up the shot she needed in given circumstances.  For example her second at three headed for the right half of the green before curling gently around, rolling down to finish about 12 feet behind the pin and was duly despatched into the hole and her second at eleven was a high pitch which landed softly before coming to a halt a few feet short of the hole,

For Pippa, it must have been like being struck by a runaway train.  Starting on the first, Fiona sank a putt which put pressure on Pippa’s subsequent shorter effort.  She survived that but thereafter sympathies lay with her, for she never had a chance to settle down and relax into the game.   Nevertheless, she took it in good part.  Indeed, even in extremis, she must have enjoyed watching a really good golfer in action.

For the few spectators, it was a chance to relish the surroundings of the Thorpeness course.   Its beautiful and lush leafy greenness made a splendid backdrop to the game.   Only needed was a touch of warmth from the sun to make the day perfect.  Chilly and overcast it might have been, but it was a dryer day than the previous two and the senior golfers patently enjoyed their chance to play their championship ‘alone’. Hitherto, their starting sheet was tagged on behind that of the Main event which rather divested it of some import and obviously meant that entrants could only play in one or other of the two championships.

The new Champion thanked the County for the organisation of the Seniors event and said she thought separating it out from the Main Championship had been successful.  Certainly the number of entrants had increased considerably and the new arrangement had allowed seven competitors to enter both events.

The general consensus seemed to be that this is how things should be in the future.

There were, of course a few Covid restrictions to be observed, but they were not allowed to spoil the feel-good factor of being out and about in company.  As with the Ladies Championship, it was decided to present the trophies at a later date.