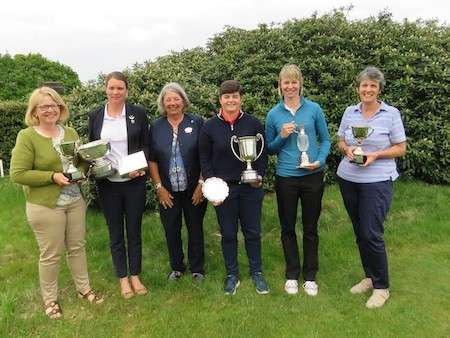 What a day’s golf the final day of the County Championship turned out to be!

Alice Barlow and Vanessa Bell found themselves battling it out for the  title, Alice for the third time in a row. Alice was ready at the published tee time, having completed her semi-final match against Amanda Norman on fourteen.  Alice was steadiness personified and Amanda looked a little weary, having probably played more golf in three days than she had in a long time.

The other semi-final, Vanessa Bell versus Abbie Symonds, was quite a different matter.  In regulation play, which had been hard-fought all the way, Abbie found trouble on the surrounds of a bunker at seventeen and went to eighteen, one down.  There, playing shot for shot, Bell missed her crucial putt for four and Abbie slotted hers to take the match down nineteen.

After that the pair of them couldn’t be separated until, eventually, on the fifth extra hole, with the pin in a tigerish spot at the top of a slope and near a bunker, Abbie short-sided herself on the wrong side of the bunker, while Vanessa was safely putting.  Abbie’s chip flew too far and she conceded hole and match.  Hard luck for her because she had played beautifully.  Abbie came of age in golfing terms playing County golf in 2017.  She is a great fighter and skilled with it.

In consequence of all this excitement, Vanessa swallowed a hurried lunch and went out to meet Alice in the final.  They had a grand tussle.  Alice began well, winning the first two holes.  Vanessa steadied herself and won six with a par four to the Barlow bogey.

There was a change of fortunes on eight where the Barlow drive drifted right.  She reloaded then found the first ball but a drop was required. Vanessa meanwhile played down the fairway for a steady par five which Alice couldn’t match.  Score all square.

The par three ninth was probably Vanessa’s highlight.  She almost holed her six-iron shot to the 154-yard flag and went 1 up.  Alice struck back, winning ten, eleven and twelve. Two up again and under control, it seemed.  However, at thirteen, she pulled her tee shot into bushes and the ball was gone.  She played her provisional ball but an eventual concession was forthcoming and Vanessa took a hole back.

Alice’s one-up status remained for the next two holes.  At sixteen a little fatigue seemed to plague Vanessa. Alice gave her a chance when  a wayward second tangled with a bush but she played a great approach. Vanessa mishit her approach shot making six and allowing Alice to recover her two-hole advantage.  Down seventeen Alice made another par which produced the half she needed for a 2/1 victory.  It was a tremendous game and the rather small crowd thoroughly enjoyed it.

Silverware was handed out at the presentation by Mr Detmar Hackman of Sabona, the County Ladies’ sponsor.  The Association is very grateful for the Company’s continued generosity.  The golf course was in lovely condition and the weather was kind.  The golf was good and it was a happy experience.

The final of the Seniors Championship resulted in a 4/3 victory for Vicky Hunt (Ipswich) against Lotti Edmunds (Aldeburgh), who has a very good record in this event.