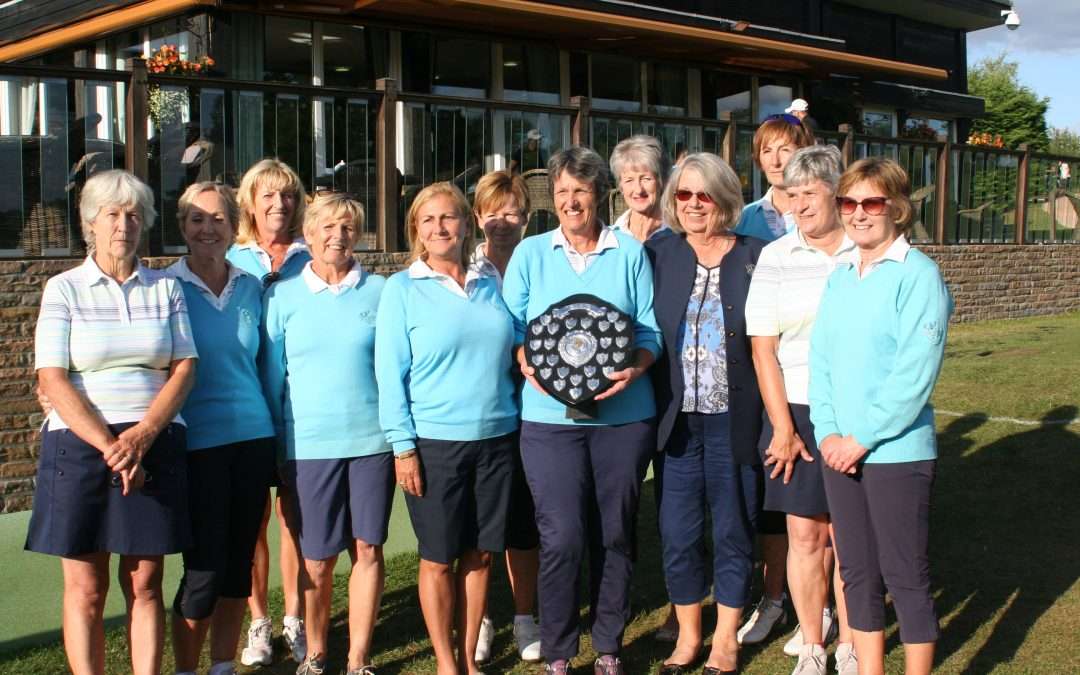 Ipswich won the Senior Jubilee Shield at Bury St Edmunds, beating Stowmarket by 3 holes in a tight match.  The standard of golf was good in this four ball better ball format (Hambro scoring), with some impressive hitting, followed by steady putting.  For the small band of supporters, the outcome remained satisfactorily in doubt for much of the afternoon

In the first match out, Stowmarket (Jane Foster and Pat Partridge) beat Ipswich to the punch early on in their match hurrying to four up after four holes.  At the short, gently dog-legged par four fifth, Vicki Hunt, currently the Ipswich Ladies Captain and partnered by Louise Overbury, got away a long drive and then hit a fine second which finished a few feet short of the pin.  She duly sank the putt for birdie and stopped the Stowmarket advance.  The score oscillated between a three and four hole deficit for Ipswich until they reached the second half where they made a concerted effort drawing back towards all square.  Eighteen came a bit too soon for them, Stowmarket hanging on to win by one hole.

The next match between Jenny Buckle and Wendy Wilderspin (Stowmarket) and the Anne Archer/Helen Bray combination was a close affair all the way round with neither partnership able to sustain a 1up position or advance from it.  They were all square after nine, also after 15.   Ipswich went 1up at sixteen and finished 1up after eighteen, balancing out the Stowmarket win in the first match.

The architects of the eventual outcome were to be found in Match Three, that featuring Diana Glasswell and Di Evans for Stowmarket against Di Hitchcock and Sue Bailey (Ipswich).  Ipswich were 3up after nine and set off up ten in determined manner.  They held on to their advantage through to seventeen where they went four up.  At eighteen Bailey hit a splendid approach, finishing a few feet short of the pin, good enough for a half, giving Ipswich a four hole lead.

Elaine Anderson and Lesley Barnes almost redressed the balance for Stowmarket.  They were square after six against Ann Rex and Karen Ramsey in a game of good golf.   In general, par or birdie was required to win a hole.  The Stowmarket team was 2up after nine and though the close tussle continued, they finished at 1up after eighteen